Welcome to the English version of the historic panel of La Gerbetière.

Etymology : The name « Gerbetière » comes from gerberie, a place where wheat was stored.

« My father’s beautiful property was situated in sight of the Loire… I found it delightful… Everything attached to it seemed to me of a superior class.

I am deeply attached to France and I wait impatiently for the day when I will enter my old garden on the banks of the Loire, and with a spring in my step reunite with my mother. » Jean-Jacques Audubon. 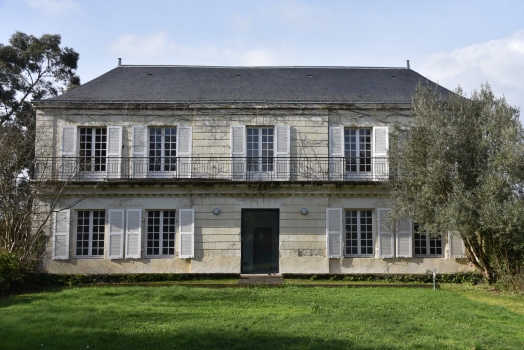 La Gerbetière is a 17th century aristocratic mansion, modified at the end of the 18th century by Jean Audubon, who had his initials incorporated into the balcony’s railings. It shows a beautiful, Directoire-style tufa façade. The building was modified again at the beginning of the 20th century : so the limestone dormer of the façade and the buildings that formed an enclosed courtyard were destroyed.

The large garden, protected by its high walls, is an invitation to daydream : it houses several exotic trees, such as a loquat, a eucalyptus tree and a number of local species.

The birth of a vocation

Jean-Jacques Audubon experienced some formative moments of his childhood at La Gerbetière. Drawn to the surrounding marshes, he made his first drawings there, which are today mainly conserved at the Natural History Museum of La Rochelle.

« It’s at about this time that I embarked upon a series of drawings of birds of France, that I continued until I had reached over two hundred. » J.-J. Audubon

His father kept company with ships’ medical officers, merchants, and sailors, and notably Charles-Marie d’Orbigny, all of them enthused by botany and natural history, which would encourage his vocation.

« I grew and my passion for natural history grew with it. Everything I saw, I wished to own. More ambitious than the conquerors, I desired the world, and my desires had no limits. » J.-J. Audubon

Very young, he visited the United States, a wonderful destination for an adventurous soul. In Louisiana, in the bayous of the Mississippi delta, he observed the finest birds of the continent. His chief work, « The Birds of America », is a true masterpiece.

Today, Jean-James Audubon is known to all Americans. The National Audubon Society is one of the most powerful environmental groups in the United States.

Extracts from « The Birds of America », etching and dry point watercolour

Close by to La Gerbetière stretch the Musse marshes, today named after this illustrious native of the area. They accommodate an extremely rich fauna and flora: storks, herons, and corncrakes; snake’s head fritillary, willows, poplars, and oak pollards, which line their canals.

A place for culture

La Gerbetière was restored and adapted by the municipality of Couëron to become a cultural venue open to all: exhibitions, concerts, and shows are regularly organised there.

Works of the young  J.-J. Audubon

From the collection of the Charente-Maritime Natural Sciences Society

Conserved by the Natural History Museum of La Rochelle

Discover the history and the heritage of Couëron